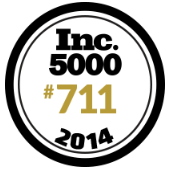 For the third year in a row, Infosemantics has been named to the Inc. 5000 list by Inc. Magazine. The list is the most comprehensive look at the most important segment of the economy—America’s independent entrepreneurs. Companies such as Yelp, Pandora, Timberland, Dell, Domino’s Pizza, LinkedIn, Zillow, and many other well-known names gained early exposure as members of the Inc. 500|5000. Infosemantics was ranked number 711 out of 5,000 on the annual list of privately held companies, with a three year growth increase of 636%!

The 2014 Inc. 5000, unveiled online at Inc.com and with the top 500 companies featured in the September issue of Inc., is the most competitive crop in the list’s history. The average company on the list achieved a mind-boggling three-year growth of 516%. The Inc. 5000’ s aggregate revenue is $211 billion, generating 505,000 jobs over the past three years. Complete results of the Inc. 5000, including company profiles and an interactive database that can be sorted by industry, region, and other criteria, can be found at www.inc.com/inc5000.

“What surprises me, even though I know it’s coming, is the sheer variety of the paths our entrepreneurs take to success, thematically reflecting how our economy has evolved,” says Inc. President and Editor-In-Chief Eric Schurenberg. “This year there are far more social media and far fewer computer hardware businesses than there were, say, six years ago. But what doesn’t change is the fearsome creativity unleashed by American entrepreneurship.”

The annual Inc. 5000 event honoring all the companies on the list will be held from October 15 through 17, 2014 in Phoenix. Speakers include some of the greatest entrepreneurs of this and past generations, such as Michael Dell, Martha Stewart, host of the CNBC show “The Profit” Marcus Lemonis, Container Store Founder and CEO Kip Tindell, and Chobani Founder and CEO Hamdi Ulukaya.

Enter your email address to receive news and updates from Infosemantics